Hungary took the rotating presidency of the Council of the European Union from Belgium during a spectacular evening ceremony held in the presence of 270 guests on 6 January 2011. Yves Leterme, acting Prime Minister of Belgium, and Viktor Orbán, Prime Minister of Hungary attended the ceremonial event hosted in the Cupola Hall of the Houses of Parliament (the seat of MPs as well as the government). 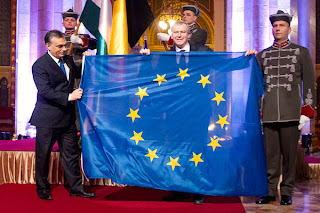 The extraordinary significance of the occasion was highlighted by the presence of Pál Schmitt, President of the Republic of Hungary, every government minister, the Speaker and deputy speakers of the House, the chairmen/group leaders of each parliamentary party and the complete diplomatic corps accredited to Budapest.

A spectacular shower of lights illuminated the Cupola Hall, which at other times is only moderately lit to pay tribute to the royal crown of Hungary, a relic displayed in the centre. Blue and white lights engulfed the dome when, to the sound of the fanfares, the flag of the European Union was brought in.

When the Prime Ministers of Belgium and Hungary proceeded into the hall, the lights turned to red, white, green and yellow. After the national anthems, the traditional flags of Hungary were also brought in along with the Belgian and the Hungarian national colours.

The Belgian Prime Minister started his speech by revoking the spirit of the Hungarian Revolution of 1956, and confirmed that Hungary was the first nation to punch a hole in the wall dividing Europe.

After his address, the head of the Belgian government handed over the presidency flag and baton.

Viktor Orbán thanked the Belgian Presidency for their power to withstand the extraordinary circumstances during the global economic crisis. Belgium has upheld the hope for Croatia to join the EU and for Romania and Belgium to enter the Schengen Area, Hungarian Prime Minister said. He underlined the radical change that the world is going through, the entry of new competitors and that the EU cannot be competitive in these novel circumstances unless it can revive itself on a major scale.

The head of Hungary’s government also noted the importance of job creation. “Our most important job is to face the challenge and thus make Europe greater”, he pointed out.

In conclusion, Prime Minister Orbán said the Hungarian Presidency "can work no wonders but can rub the bottle to help release the spirit, the spirit of Europe's revival".

The ceremony ended as the flags were carried out of the Hall.

The next day, 7 January 2011, the EU Commission and the Government of Hungary are to hold a joint meeting in the Houses of Parliament. The visit by the Commission to the country inheriting the presidency and the meeting held with the host government to discuss the agenda of the upcoming six months, has by tradition become the most prestigious event during the term of a presidency.
Autor: BALAJCZA Linguistic Services o 22:05 Brak komentarzy: